"We always knew we'd create a place where people could feel motivated and supported to fulfilL their wildest dreams."
​- Cath Vincent

Cath's Re-telling of the Story 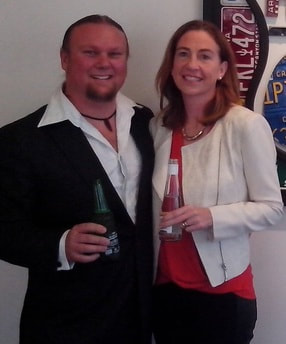 Jesse and Cath on Auction Day
F​or the last five years, I have been talking about moving to the city and having a cool warehouse building that would be a “motivation academy” with penthouse living on top! It’s good to dream right?

I often tell clients that you don’t have to know “the how” because wondering how you’re going to do something often shuts down the prospect in the first place. You end up thinking “that’s simply not possible”.  Einstein said that “imagination is more powerful than knowledge” and I am a big fan of that philosophy.  Most people “no” what they can’t do, but never really imagine what they can.

For the last five years, I have had no way of knowing “how” I could pull this off.  I still have no way of knowing that, but seeing this entry on real estate.com has sparked my interest. Could we possibly own a piece of prime real estate in Auckland Central?  Could my dreams of a creative business hub come to life?

Auction day was the most stressful and exciting day of my life. We dressed up to try and look really expensive in the hope of scaring off the competition – Jesse even wore a suit! We had to able to raise 10% of an unknown purchase price that we could hand over if we were to win it.

The auction was held at the real estate agents’ office, most of the attendees were men in grey suits and the property at 38 Airedale Street was just another item in a long list of lots for sale. But not to us – it was a dream and we were clinging on.

Once the bidding began, the emotional rollercoaster kicked in. Some of the bidders gave up quickly, but we eventually got locked in a battle with one remaining bidder – a developer who had never even set foot inside the building.  It was like a tennis match, and the heads of everyone in the room turned from one side side to the other as each of us upped the bidding. Frustratingly, whatever number we said, the other bidder would simply – and seemingly without emotion – added $1,000. It seemed there was no end to his budget, and we feared that his pockets were bound to be much deeper than ours. Sometimes I felt angry at his cat and mouse tactics, sometimes almost hopeless. And then what I felt was utter disbelief as I heard the auctioneer’s voice.

Was the other bidder going to add $1000 yet again?

“Do I have another bid? Another bid from you sir?”

I held my breath.

The Auctioneer's voice had taken on the quality of a drum roll..!

The hammer was down!  I was leaping in the air and making a peculiar noise that was part laugh and part wail of delight.